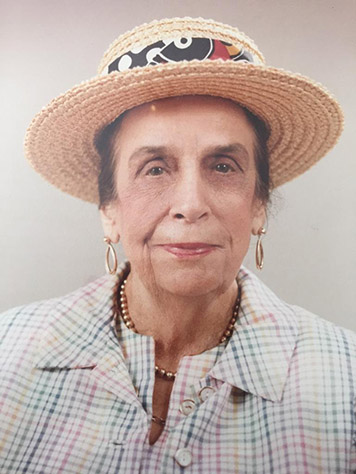 Caroline Postel Rossetter, known as Carrie, was born in Jacksonville, Florida in 1898.  Carrie's mother, Ella Maude Rogero, was born in Palatka, Florida and is descended from early Minorcan families living in and around St. Augustine. Her father, James Wadsworth Rossetter, was an agent for the Florida East Coast Railroad, and a partner in the Indian River and Lake Worth Fishing Company.

In 1904, a six year old Carrie moved with her family to Eau Gallie, Florida from Jacksonville, Florida. At this time, her father's fish company was one of the largest consumers of gasoline in Eau Gallie. For this reason, James W. Rossetter became the Standard Oil Agent for South Brevard County, and he began shipping gas via his fishing boat. During the early part of the twentieth century, many commercial fishing boats were converting to gasoline and diesel engines from sail and steam power.

James W. Rossetter passed away in 1921. Carrie, the oldest of her siblings, had been working with her father for a number of years and decided to take over her father's oil agency. At the tender age of twenty-three, Carrie had assumed the responsibilities that had rested on the shoulders of her late father. She worked hard in the first few years to keep the oil agency and to make enough commission to help support her family (mother, younger sister and three younger brothers). This was during the difficult economic period which led to the Great Depression. Carrie's younger brother, James W. Rossetter Jr., helped out during these difficult years, and the family was able to pull through along with the support of the Eau Gallie community who had respected and loved James W. Rossetter Sr., as his family did.

Carrie was the first woman to hold the position of oil agent in one of the largest companies in America, but that is not her only accomplishment in the business. She also remained in that position for 62 years. Carrie built some of the first gasoline stations in South Brevard and was the sole distributor of oil to the Banana River Naval Air Station's civilian air force during the Second World War. Carrie also continued her father's interests in the areas of both cattle and citrus.

During the later part of the twentieth century, Carrie contributed to educational institutions including the Florida Institute of Technology (FIT) and to many cultural and commmunity organizations. She was on the board of trustees at FIT from 1993 until her death in 1999. She was president of Rossetter Properties, which was dedicated to the development or real estate and promotion of the citrus, cattle, and farming industries in Brevard County through the distribution of Standard oil products. She was the director of the Sun First Bank in Melbourne from 1973-1979. Carrie was a founding member and patron of the Brevard Art Museum and a director of the Brevard Art Center and Museum. She was one of the first and longest running members of the Eau Gallie Yacht Club, and the Palm Bay and Melbourne Area Chambers of Commerce, as well as, a lifetime member of the Brevard Crippled Children's Association. Carrie was also a longtime member of the Florida Cattleman's Association and the Florida Historical Society.

Carrie had been honored by the Brevard County School District for "distinguished and valuable service to the community", and was recognized by the Chamber of Commerce as well as the City of Melbourne for over 60 years of service to the Melbourne and Eau Gallie communities. She was also cited by Chevron U.S.A (previouly Standard Oil) for her work on behalf of the company since 1921.

Carrie formed the Rossetter Foundation in the 1990s to preserve her family's homestead and to maintain its historic Florida appeal. She occupied the family home from the time the family moved to Eau Gallie in 1904 until her passing in 1999. Through her many philanthropic donations to local schools and cultural organizations, and her active role as a member of the local business scene, Carrie cemented her place in Brevard County history. She will always serve as a symbol of great success through great community sevice and superior strength when faced with diversity.